I woke this morning for the first time at a decent hour. 0545am. So much better than the jet- lagged thrills of 2am, 3am, 4am this week. Why does one’s body clock go by the hour with that discombobulation? Real life is never that orderly.

But my tupperware cupboard is.  And my pencil pot, and the ironing pile, and the files here in my office.  The things one does quietly while waiting for the dawn. 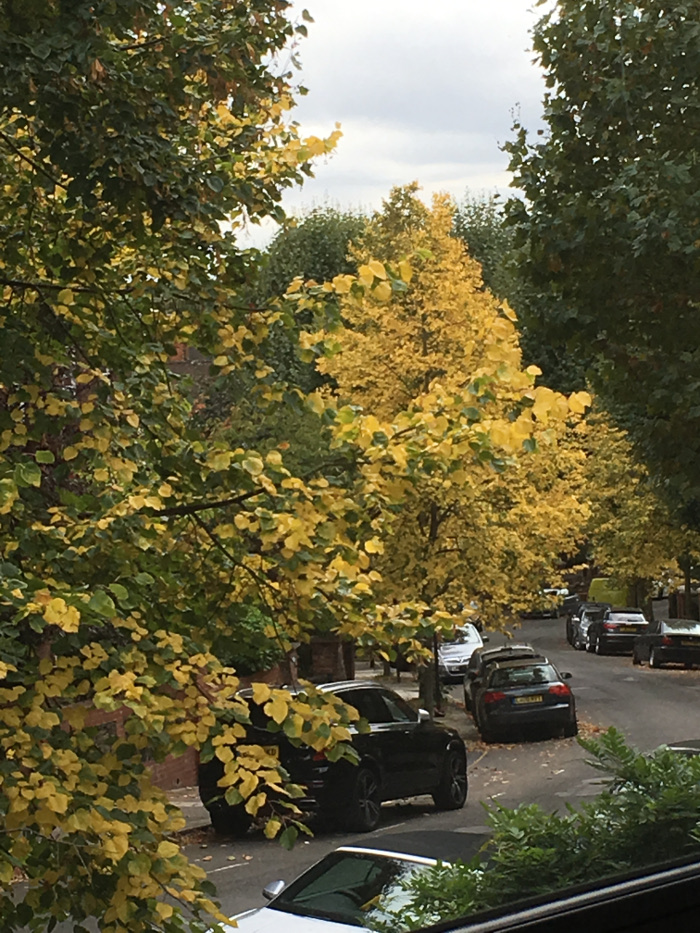 And speaking of real life. It is so wonderful to be back in the toil and the soil after three weeks away.

As I am forced to be in London one more week, it’s allotment work for me. And what a week.

I’m trying to get the hard lanscaping and structure ready for planting up. And that means yet more digging and creating permaculture beds and trying to come up with paths in between. And finding chippings to mulch the lot.

All done on a ridiculous budget of zero, plus my hours and hours of work which we don’t count in terms of budget. Because who puts a value on time in the garden? An hourly rate?

I am such a fan of London brick. Have a look at this gorgeous wall I plod past near my house each day. 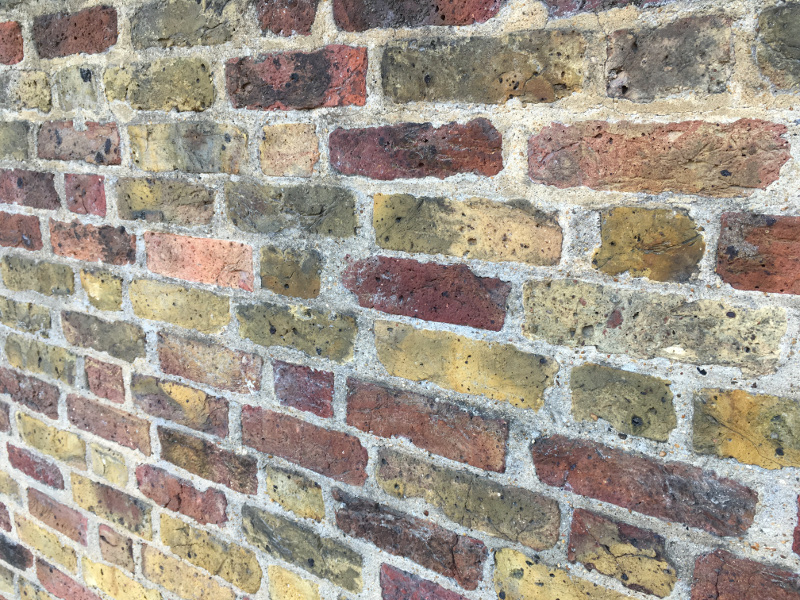 This is quintessential London clay that constitutes the bricks in this city. London Red, London Yellow. (I don’t know anyone who is a big fan of London Grubby Beige, but you get the picture.)

So far I have been able to nab some London Yellow bricks from the man who was lobbing them into the tip last month. And yesterday it was a marvellous haul of London Red.

Hundreds. As my sciatic back will attest. I am pinging with pain but so happy to have found enough to make most of the paths for the little beds.

And all thanks to the generosity of London builders. 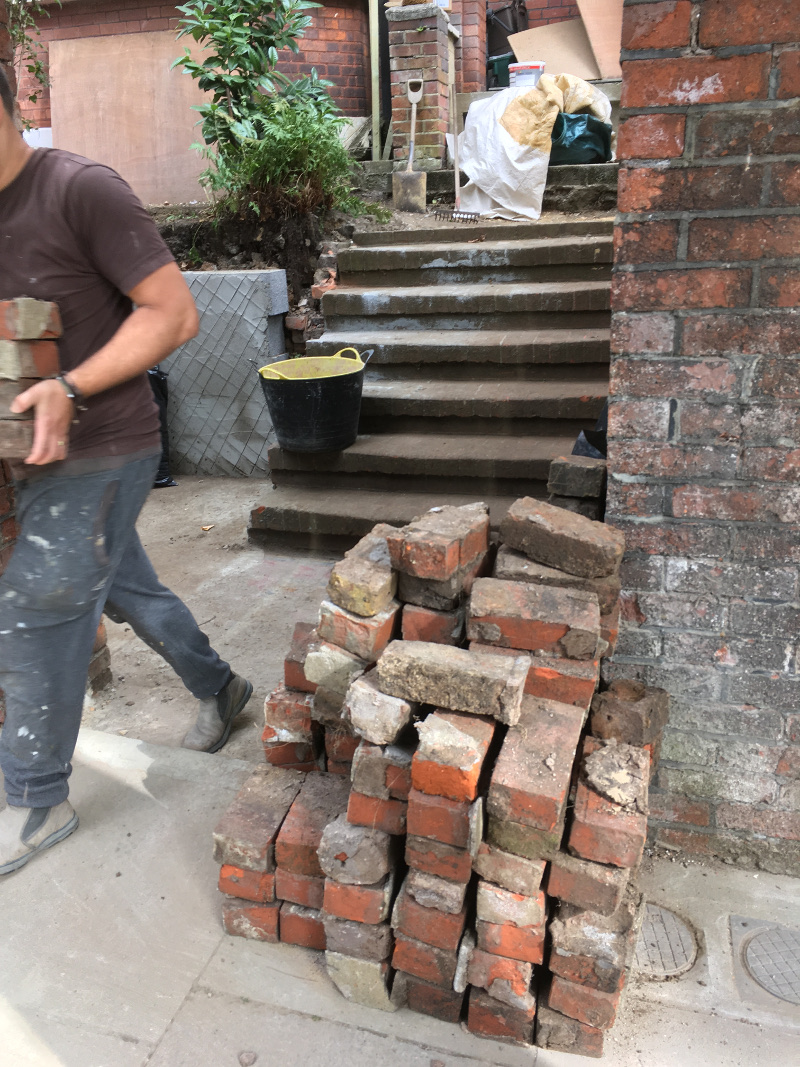 Let me pause for a party political broadcast. Never before have I been so ashamed of Brexit in my life. This city is made up of incredibly hard working foreigners, and yesterday I reaped the benefits of that generosity and team spirit from a group of disparate people who had no reason to help me, but did. I was really humbled by their generosity. And ashamed that half of this country wants them to leave.

In order of munificence I met an Iranian, a Romanian, two Italians and a Polish man who all helped me load and load and load my car with loot.

This area of London is forever being renovated. And dare I say that every third house you pass has at least one gardener’s van parked outside. I will spare you the rant of the leaf blowing machines. But here is something that always gets my pulse going. 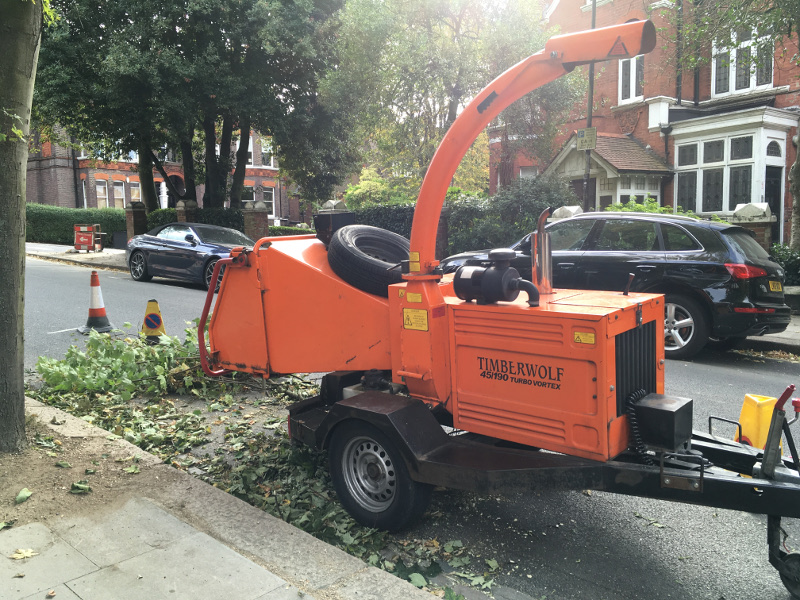 I marched straight up to the poor man working the machine (Hooman, the lovely Iranian) and fawned and gushed and made friends. 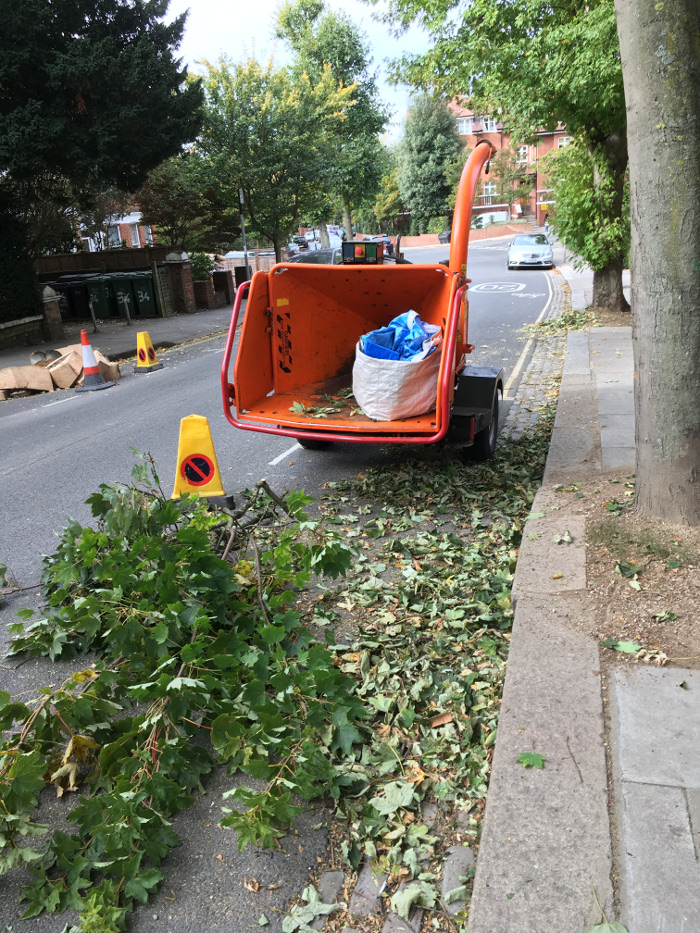 His team are working all week cutting back and cutting down 22 trees in a huge garden just down the street.

I didn’t pause long enough to marvel that anyone can have a garden so large that they let 22 trees turn into a forest. Instead it was making plans to get my empty Ieak bags down to them for filling.

‘Come any time, we’ll be here all week.’ 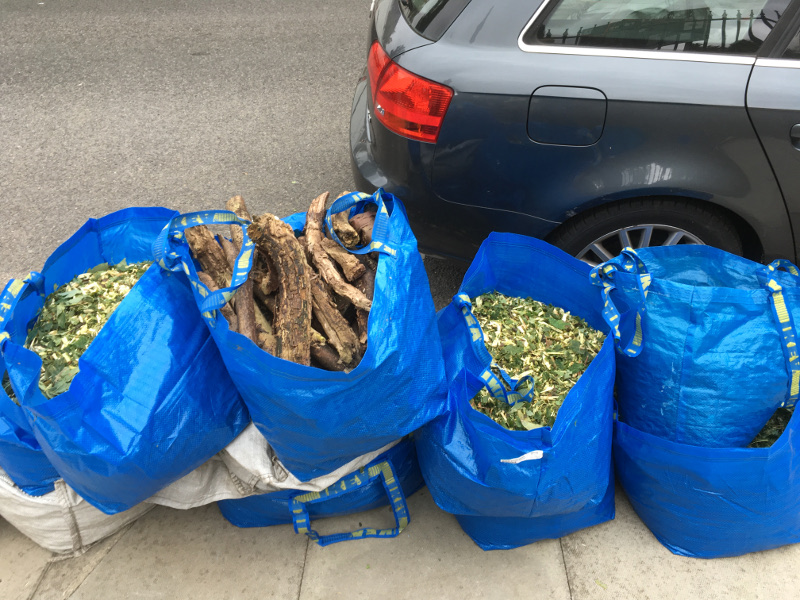 The sort of words that can make a mulch-starved gardener weep.

And not only do they fill my bags. They carry them to my car and even suggest dumping a truck load right outside the allotment gates.

Sadly that joy is beyond me as the access is too tricky. So daily car loads of bags it is. I’ll head down there in a bit to get today’s load. Or just leave my bags if the timing isn’t right.  It is transforming my little garden in so many ways.

And not content with that munificence; the gods of advantageous gifts were on my side in the brick department too.

On my way back from a trip with the mulch I spotted a group of workers waiting outside a house with a huge pile of rubbish. There is that particular look of Waiting for the Skip. The dread of knowing how much dust and mess and heavy work is ahead but enjoying the pause while looking up and down the street for the truck. They don’t mess about.

I always slow down to look and see what is being chucked away. And glory be, a pile of bricks. Step up yet another generous workman, Sergio. What a genial Italian man.

‘Of course you can have the bricks. They are not clean. We throw them away.’

I was instructed to park up, wait for the two (to me) elderly men in the crew to fill the skip that was at that very moment being barrelled down the narrow road with reckless noisy abandon on the back of a truck. After the skip I could help myself.

Actually I retreated back to my home for a fast glass of water and an even faster refuel (hauling sacks of free chippings is hot thirsty work) and peered out the window waiting for the skip to be dragged away and the precious parking space to be liberated.

I was nipping down in a trice as soon as I saw it go.

And then all three men loaded my car. Me carrying two bricks to their stacks of six.

In broken English they asked about the garden and quizzed me on what I was going to do. Paths, beds, favourite veg. The elder Italian’s face lit up when I told him that my favourite Italian vegetable was a Tuscan kale.

But the whole process took such a short time it was not a long talk. And I was so conscious I was taking them away from the proper job of landscaping and wall building. 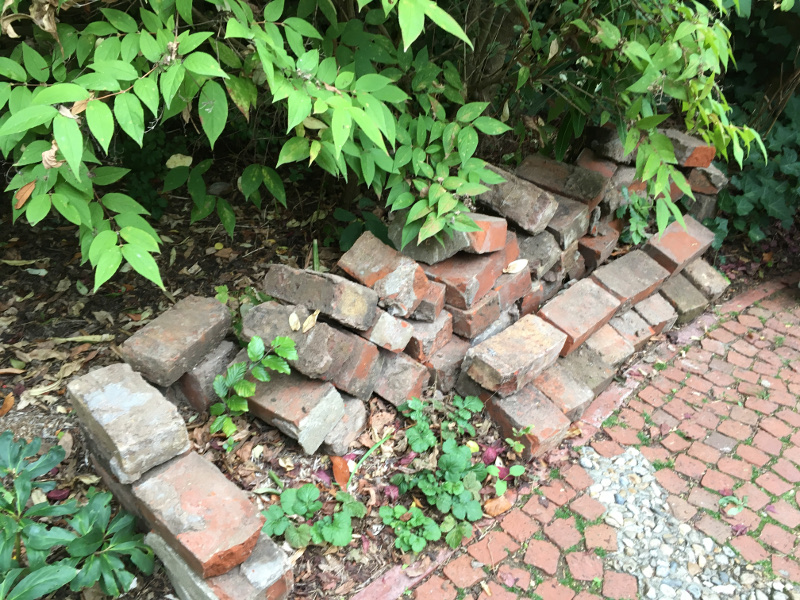 Money does change hands in these transactions. But it isn’t the reason (I think) for the generosity.  I had to discretely give both Hooman (my new best friend!) and Sergio a thank you note and £20 for their help.  For them it might be rubbish and a waste product of their work. But London bricks cost money. Cleaned London Red ones go for £1 per brick on auction sites.  And these ones may have a bit of mortar on the sides, but they are hand-made and gorgeous. If heavy!

I had so many bricks that I am stockpiling them in the garden until I can get the energy and pain levels down to take another load for another path.

The challenge is to park the car (illegally) close enough to the allotment gates then nip in, grab the communal wheelbarrow, race out, peer carefully up and down the street on the lookout for the parking enforcement officer, carry six heavy bricks at time up the path, through the gates and onto the plot, repeat.

It’s hot hard work but one only does hard landscaping once.

The terror of a parking ticket makes one move fast. And all the while I have to remember what time Hooman and his team have told me when to swing by and collect another load of mulch.

I missed my timing yesterday. I was hoping for a double car load of the lovely chippings. But by 330pm the team had left.

Leaving me to look longingly at the next promise of a freebie.

A beech tree. Cut down. 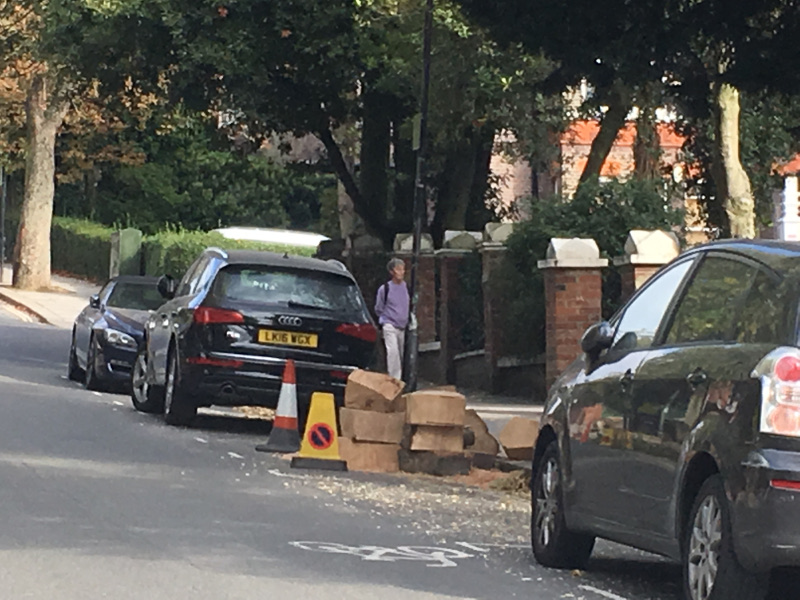 ‘Do you want me to cut it into lighter loads for you? It’s not a problem!’ 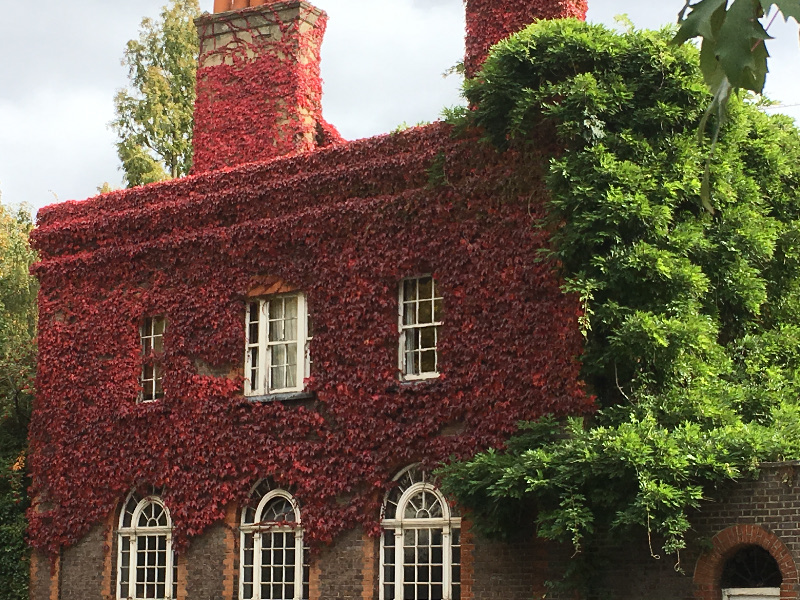