Gardening on the edge 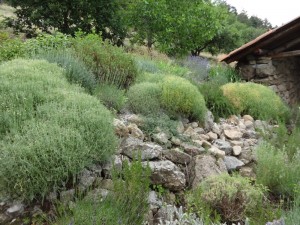 We have been having high temperatures (30C) and no rain for a month now.

And around the garden I can see the consequences of this drought. I would say that I am really gardening on the edge of this hot spell.  And that means my choice of plants is risky.

The drought tolerant lavenders and santolinas are mostly fine; but they are looking parched in places.  A good downpour should see them improve. 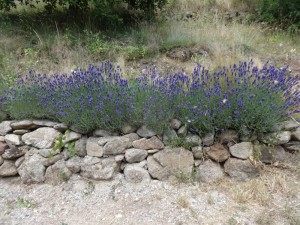 I don’t dare take a photo. The ones I am showing here are the Hidcotes.

The stoechas came from the same Filippi batch in 2010.  The cistus are losing their leaves in parts but I just take that as a normal and clever device on the part of the plant to preserve the whole while sacrificing parts.  But lavender?

I need to research my varieties.  I do love lavender stoechas as it flowers so early (around May) but unless I deadhead it smartly, it looks like brittle sticks.  And many of the five shrubs I bought were felled in the minus 18C cold snap we had a few years back. 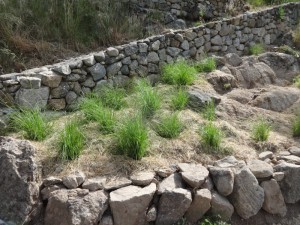 So thoughts are needed there.

I ought to be writing more about this. The close up and careful observations of this mountain Mediterranean landscape.  But right now I am responding to the call of the potting shed.

(And wolfing lunch, standing up at the kitchen counter typing with half an ear on the laundry that is about to end and demand hanging out.)

I just came back from a zippy 40 minute round trip to get my favourite potting compost and am itching to pot on the vegetables and eragrostis grasses that need to be neglected for five days.

But they are fine in this dry climate. The grasses are positively glowing. Maybe not really growing, but I’ll take glow over parched brittle sticks right now.

« Hiding all sins » A curious solution