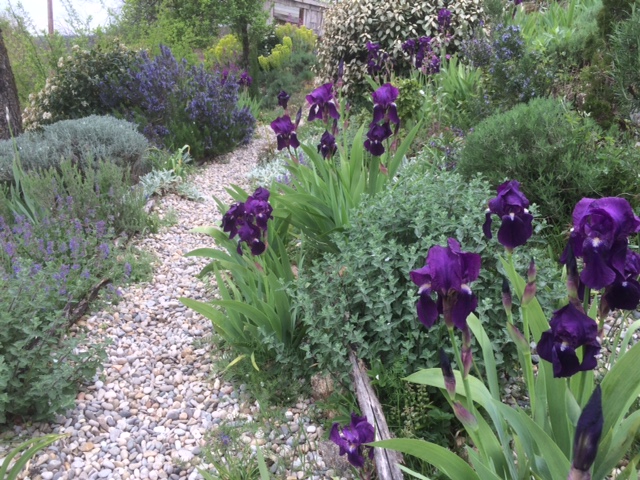 Two weeks. Max. Would you commit to anything in your life that will only give you joy for two weeks? Of course you would.  Great restaurant meals only last a few hours.

So it is with flowers. In spring you want things to hang on and on. But actually the word ‘fleeting’ always comes to mind when I think of a lot of spring flowers.  The daffodils can bloom for a month. But in a drought (we are having one at the mo) things desiccate fast. 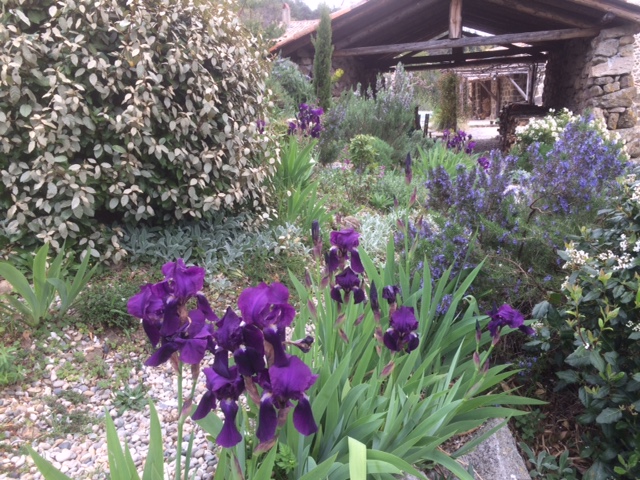 The wisteria will flower for longer – I have no reason why the one in front of our house will flower all summer. I suspect the fact it is right near the downpipes for the rain water and the waste pipe from the washing machine might play a part. (You will see that glory later).

Irises. Two weeks if I’m lucky. And don’t even think of getting any joy in a vase.  They don’t do well. The flowers have that brilliant habit of opening gradually. Like gladioli. So by the time the top flower opens to spectacular velvety bliss, the bottom flowers are soggy and slimy and attracting grubs. 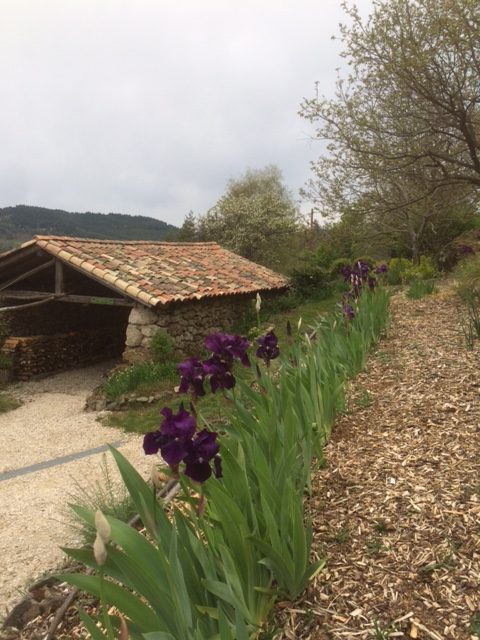 What can I say? I love them. And if you have a long narrow space – or a mountain of narrow terraces then you can’t beat them for maximum impact in a very skinny space.  On the oak bank you tend to gaze uphill. So what better way to create a sort of screen than a bank of plants? 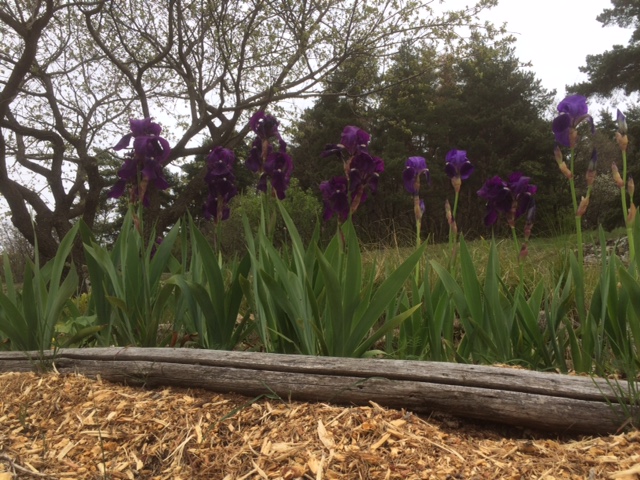 This is Alice’s path where I decided to shove in some irises on the edge to save having to weed or mulch. Add in some self-seeded euphorbia and honesty and it almost looks like a design. 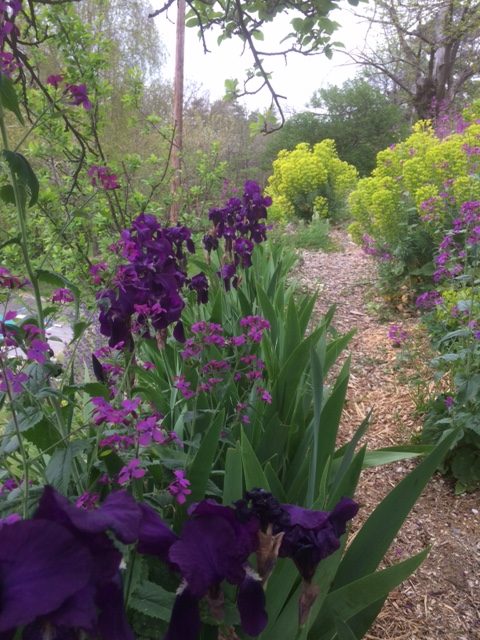 I did a mass planting in the guesthouse garden and the plants had a think for a season.  Some flowered, others stayed in leaf. And this year I have the sight of realising that I have mixed my colours. Who knows what colour an iris is till it flowers? Who’d have an iris plant nursery? 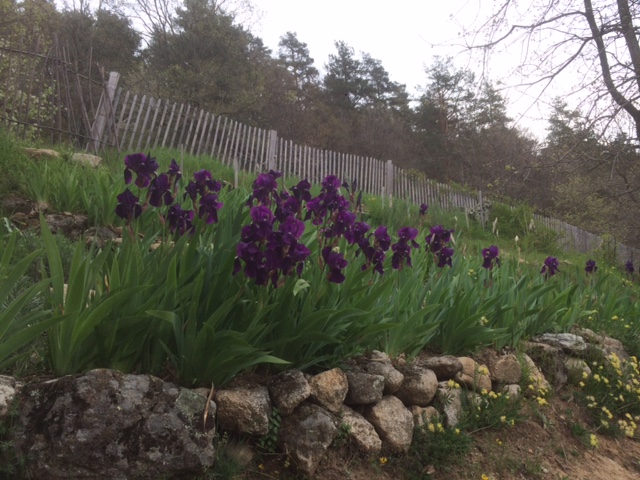 The dark blue / purple ones are coming out first and the paler blues will emerge a few weeks later. I can see their buds – taller and skinnier all mixed in between. So with luck and if I can nip up with the secateurs in time, I can cut off the spent ones before you notice I’ve mixed the design. 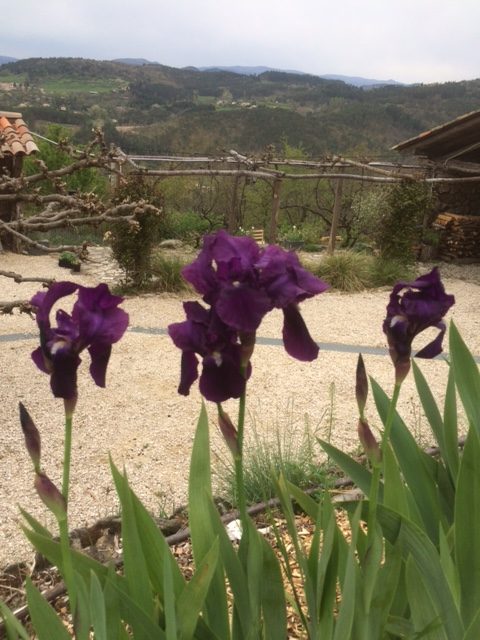 It’s the same here on the edge of the orchard. I think there is a gorgeous dark black iris in among the mix. But it hasn’t shown itself yet. 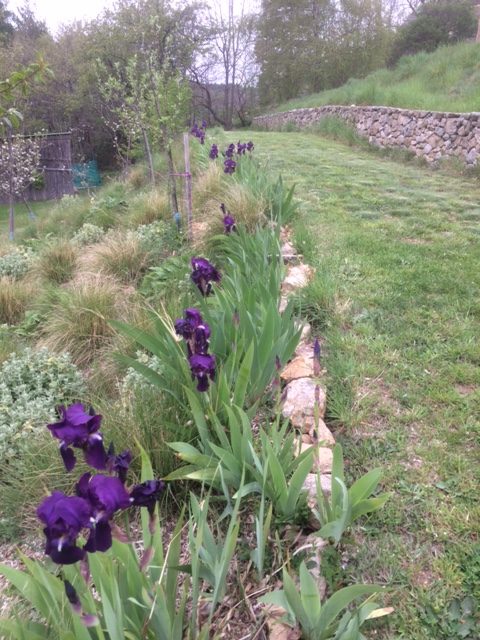 I guess I’ll have to be patient.

It will be a blink and you miss it moment, but that’s irises for you. 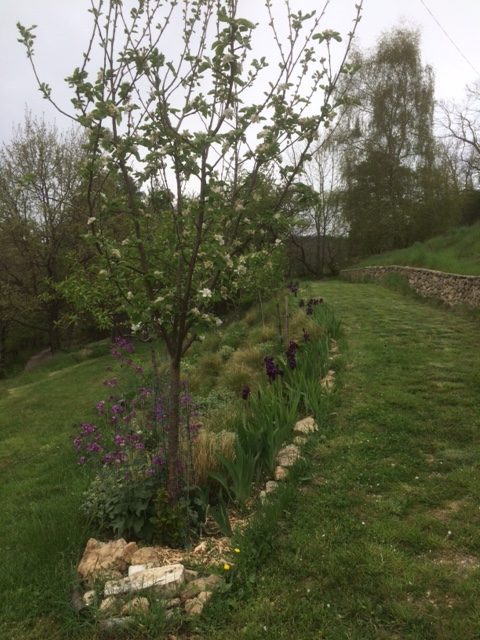