Fending off the beasties

I am under attack. Each morning I head out with the dread feeling ‘what will I find?’ Another rainless sunny day, Yes. But argh. marauding boars.

They are hard at work.  We are still ridiculously dry and there is obviously not enough food in the forest for them. So this is the sort of damage I discovered this week.

One Ceanothus plant yanked out. And all sorts of terracing churned.

The lower terrace takes the brunt of their scavenging and digging.  And I must say it is like having amateur archeologists on site. I have never really studied the slope of this terrace before. And lo, there is actually a proper stone wall under here. The boar have dragged down so much material they have exposed the huge stones under the soil. 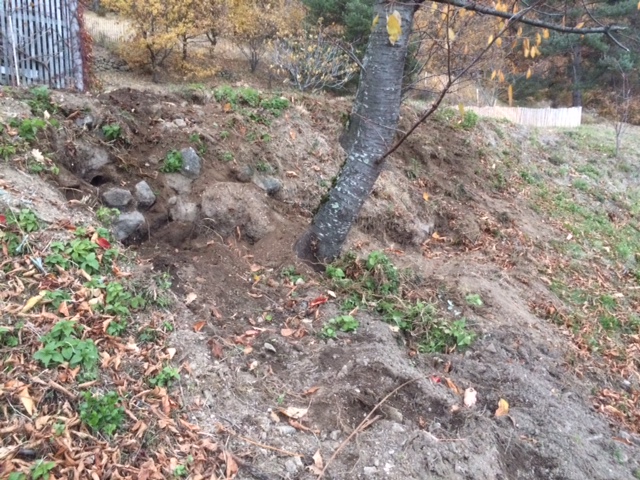 But the wall itself must be very imposing. It must be very tall – 15 – 20 feet high? I don’t know.  But as the top of the wall has to support the road up to the house, I’m reluctant to want to keep digging.  But it does give me pause for thought. 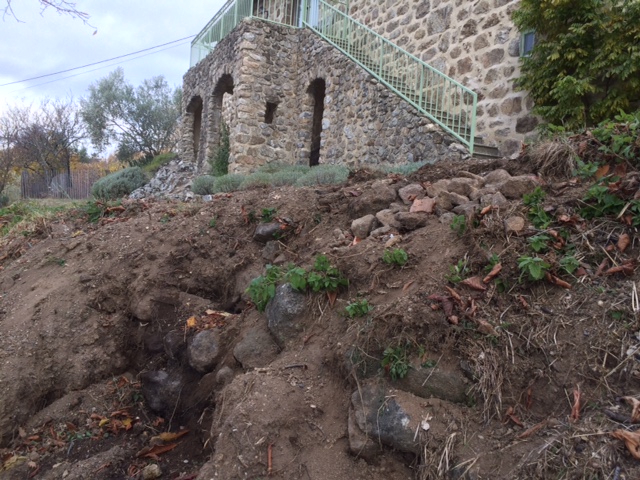 I have more than enough projects to be getting on with before excavating such a huge long wall. The chipper is calling.

But while I am moaning, there are other thrilling beasties on the mountain top right now. 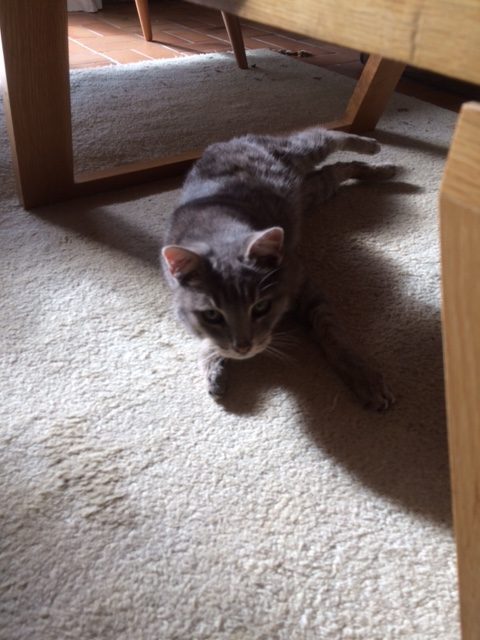 The clarion call of one loud elderly cat at the ridiculously early hour of 0451 woke me up this week.  He probably calls out every morning at that hour. But his crying outside the bedroom must have penetrated the deep sleep of the just.

And without thinking I got up and let him in. He raced to his spot in front of the fire. And I staggered back to bed.  Not to sleep well of course. I could hear Artur’s wheezy breathing, and my brain decided to whirr with lists. I’m sure you all know that feeling. 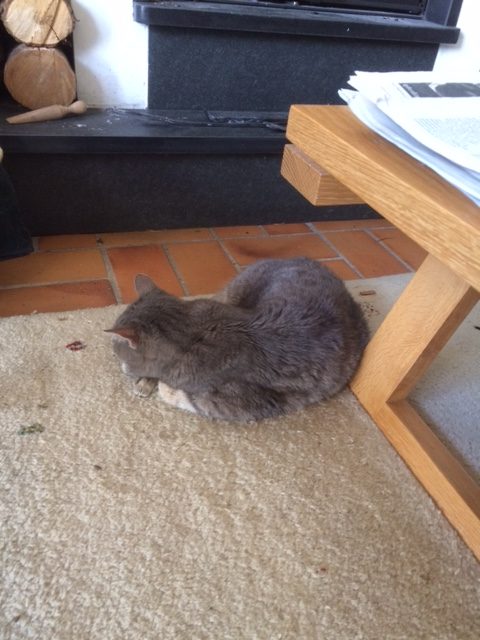 Don’t ask me why Artur thinks it’s nicer to sleep on a bit of carpet rather than anything I can offer.

But I did get up in time for a view of a deer munching on the lavender plants right in front of the potager fence. I don’t think he liked the flavour much. He quickly leapt over the gate and headed towards my rocket and swiss chard plants instead. And he managed to ignore the  shrieking banshee from the window. 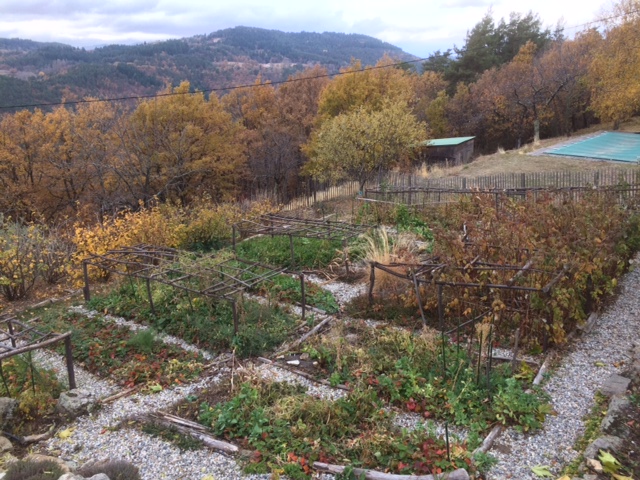 I didn’t have time to photograph the little blighter. Nor capture another shot of him (or her) IN BROAD DAYLIGHT munching on my plants at the other end of the vegetable garden. Well it was lunchtime for me. So the deer obviously thought it was acceptable. 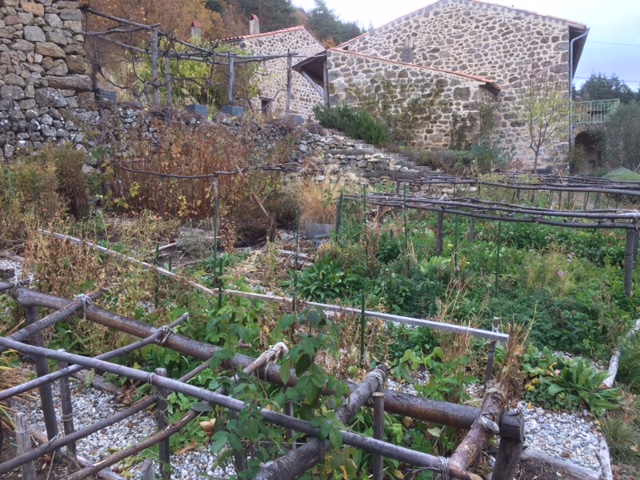 I feel sorry for the animals of course, the vegetable garden is so lush compared to the parched landscape outside the fence. But really. At lunchtime? 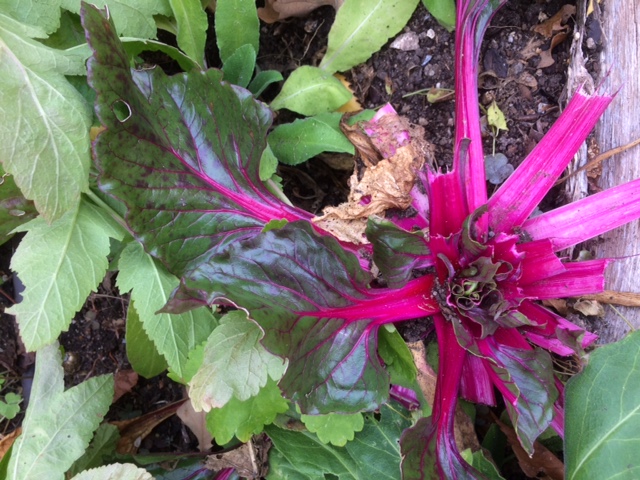 I have come to the conclusion that I will have to share the vegetables with the deer this winter. They can pop over the fence with impunity. I might try and cloche the swiss chard…. I just went out and checked. Too late. Munched.

They can help themselves to the rocket. But I do draw the line at boar. 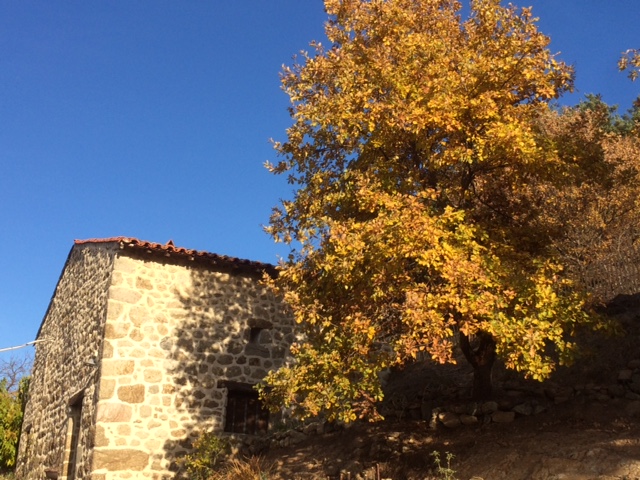 « Mulching » The Ardèche in autumn