Cutting back the eragrostis grasses 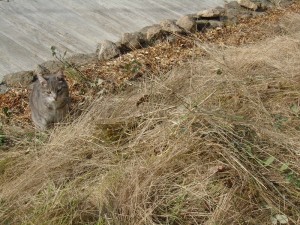 Secateurs at the ready. Off I go. This is the annual maintenance on the grasses. I cut them back every spring.  And I always marvel at how many I have planted over the years. And end up being appalled by the quantity.

Cutting back takes time. Especially on a steep slope.  But every year get a bit easier as the grasses put on a bit more girth and I can prop my boots against them to gain a bit of purchase on the slope.

Actually what I should use is a climbing harness and a rope. Next year. 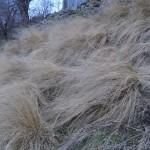 I had a supervisor.  In fact there aren’t many shots where you wont see a small furry grey creature.  He positioned himself about six feet away from me all day.  But as I moved about and gradually made my way along the steep pool bank, Artur had to move as well. 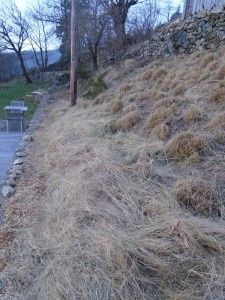 Here he is about to leap into the waste product from all these grasses: soft mulch.

And for once I didn’t need to move it far away to put it to good use.

I am heavily mulching the strip of bank in front of the wall (and the pool).  It’s going to take me a few months to sow enough new eragrostis grasses to fill in the gap left behind from the wildflowers which grew here.

So I’m hoping that a thick mulch will deter weeds and prepare the soil for the summer planting.

It took me until just after lunch to cut back all the grasses on the pool bank. And then I turned my resharpened tools onto the next bank. 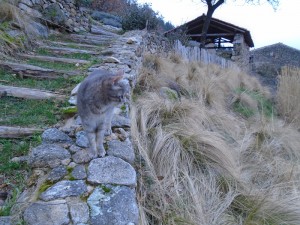 And here I needed to weed as well as cut back.  The pool bank has settled down somewhat from its incarnation as a bank of brambles. 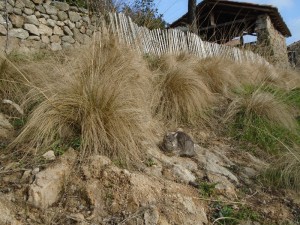 But the lawn bank is only freshly created. And boy are there brambles and nettles in here.

So I was slow.

And I was tiring. At least the lawn bank is not as steep. So I was able to actually sit down and cut a few grasses before I had to move on.

But with buckets for nettles and the roots (which I soak in a barrel for nettle tea that goes back on the garden; and kills the roots at the same time) and separate bags for weeds I trudged a bit. 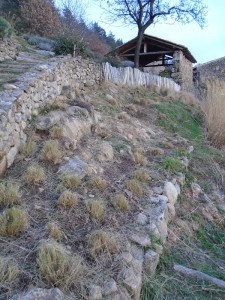 By 5pm I knew I had to down tools and collect more logs for the fire. So I can’t show you a finished lawn bank.  But I’m three quarters of the way there. So that’s good progress for my first day back.