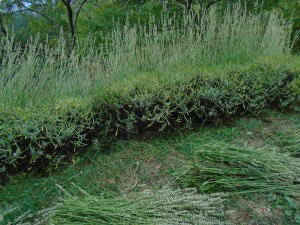 This is an aromatic task. And one I was reluctant to undertake.  Poor, poor lavender.

What a year. You know what they say about not pruning lavender back to the dead wood? Does that give you a hint about what lavender shrubs look like under those tall stalks? Dead. Dead wood.

Yep. This garden is filled with about 150 dead looking plants.  And I didn’t even get the delight of tall blue aromatic flowering stalks this year. The scorching drought and heatwave arrived just at the moment the shrubs flowered. And I am left with pretty scentless grey stalks everywhere.

A lot of people leave their flowering stalks on the plant before pruning in spring. But I can 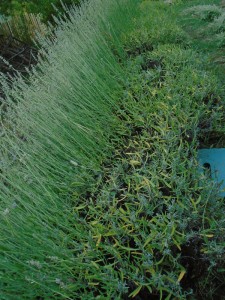 ‘t risk that with our heavy cevennol storms. Too much rain falls too quickly and will flatten these plants and cause damage with all the weight of the flowers.

So I usually cut twice. Once now to take off the flowers, and then in spring to give them shape.

But as I settled to the job, I realised that there are barely two leaves alive on each stalk before you hit the dead stuff. So I had to go very carefully. Usually I just grab a hank of plant and cut.  But this was like giving a very careful haircut to an awfully large number of plants.

And after about forty I felt as though the will to live was leaving me.  This is an enormous job. 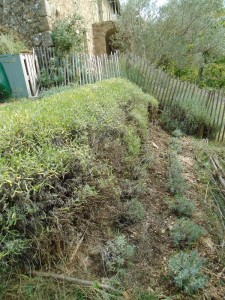 So I just did one side of my steep bank of lavender.

The reek of lavender oil on my hands was making me woozy.

I’ll try and finish the job before the winter settles in. 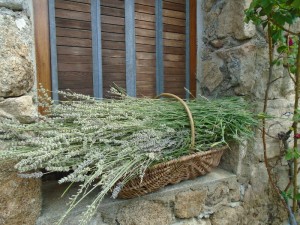