Ink pink I stink. I can’t think why I chose to wear a new t-shirt today. But it was a mistake. Wafts of unpleasant odours kept drifting up as I hauled sack after sack of mulch to the car. New clothes chemicals? Or did my body get a shock after the usual uniform of loose fitting long sleeve shirts? Sorry to share!

Oh yes. Mulch. Dare I say I think this might be my last mulch foray this year? I think so. 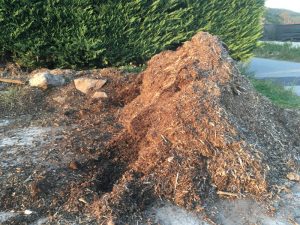 I had been on Sunday (eye rolling, yes we know! You keep posting pictures of it), but seeing that the pile was getting to the dangerously low level, I nipped up on Monday night to claim a teensy bit more.

It definitely has that look of ‘going, going, gone’.

And I had two urgent jobs that couldn’t wait for spring when the pile will be restocked.  The path in front of the house above the lavender bank. And the oak bank.

I have a major job to do on the lavender bank. And hiding the eyesore seems to make me feel better.  The scraggly lawn on this path never really thrives.  It had been completely denuded when the house was repointed. And I resowed with grass seed, and even put in a bit of work getting it going. 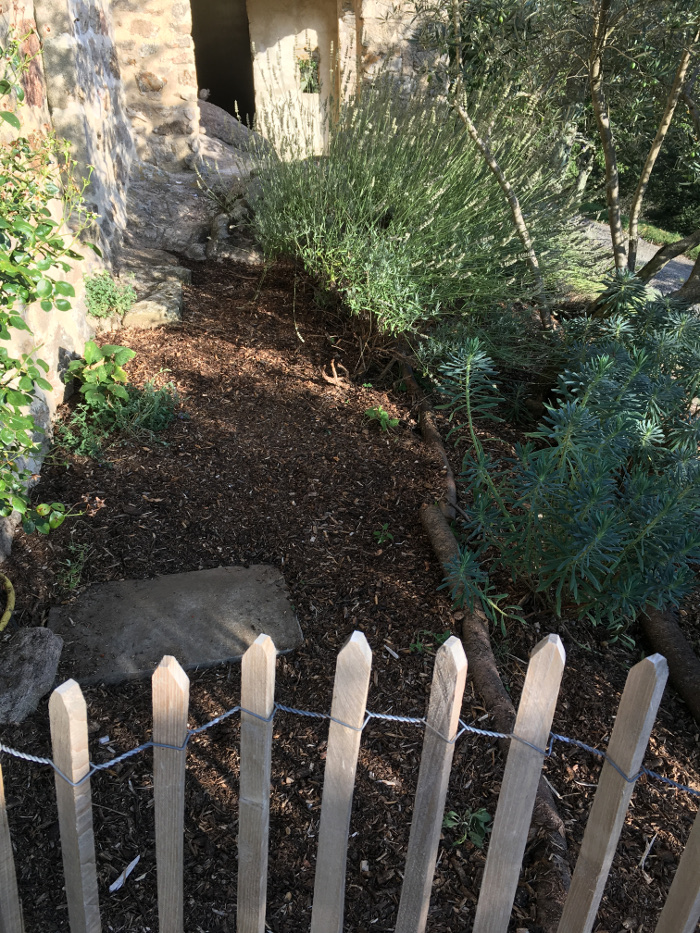 But you risk life, limb and stinky shirts when you take the mower anywhere near the New Dawn rose that clings to the wall and any person who dares to come near. It’s better than a savage Rottweiler.

The gate will stay. So I decided to give in and thickly mulch.

And now when I open the bedroom shutters in the morning I can look down on brown. (It’s a small consolation – beats agonizing whether to pull up all the lavenders and root out the euphorbia, hard prune the olive and start again.)

The other job that felt half finished was the oak bank. I have already mulched. But not enough. I took the hose up there a few days ago to dose the transplanted irises. And found that a forest of little weedy grasses were enjoying the drenching.

Cue idiot gardener sitting in the sun pulling out tiny grass seedlings with tweezers. They are nicely tucked right under the iris rhizomes and devilishly tricky to tease out. 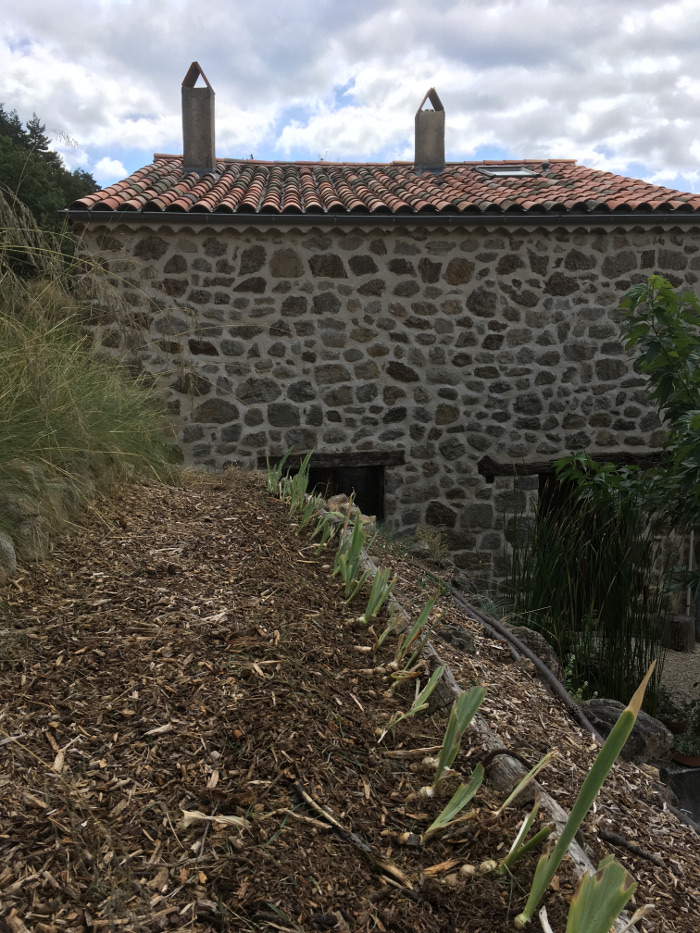 I have decided to only do this once. This long line of Iris will turn into a Frida Khalo monobrow of grass if I don’t attend.

So mulch, mulch, mulch. Bury the blighters. Block out the light.  I know that the rhizomes need to bake in the sun to build up flowering potential. But it’s autumn. I’d rather they had a safer winter under cover than have to contend with lusty grass. 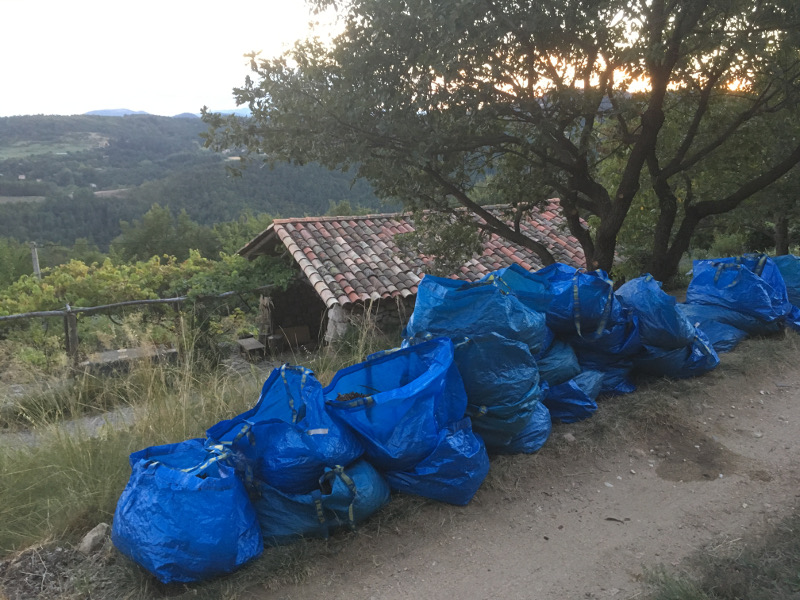 The only ‘challenge’ with an evening raid was the clock. I had to rush to get the sacks filled and then beetle back trying to ignore the glorious setting sun.

You get into a mad frenzy with this mulch lark. It has to go down the second it comes out of the car.  You wouldn’t ask someone to wait hours and hours for a fabulous slice of raspberry cake. The same with mulch. 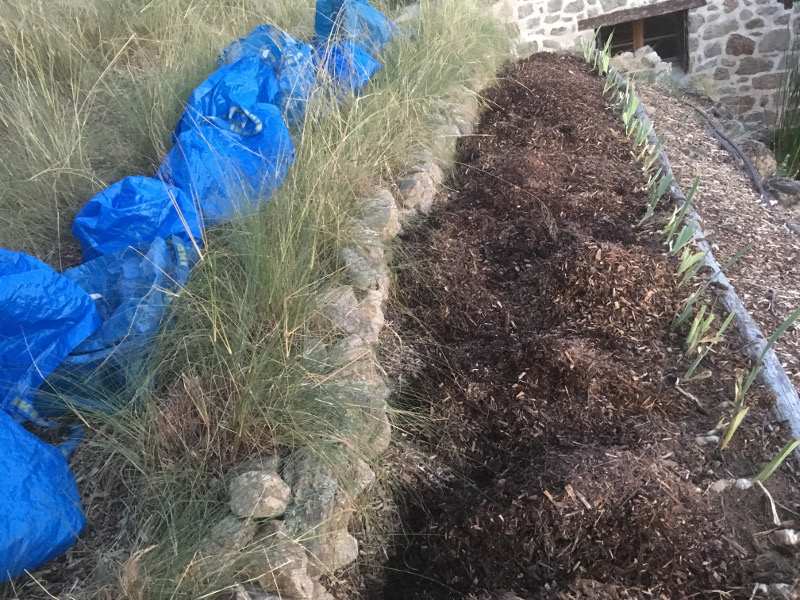 So I upended like mad and then hoped that I had done a good job. I was flinging it about. Rushing to get indoors and remove the stinky shirt, and hoping that the stuff was going in the right place. 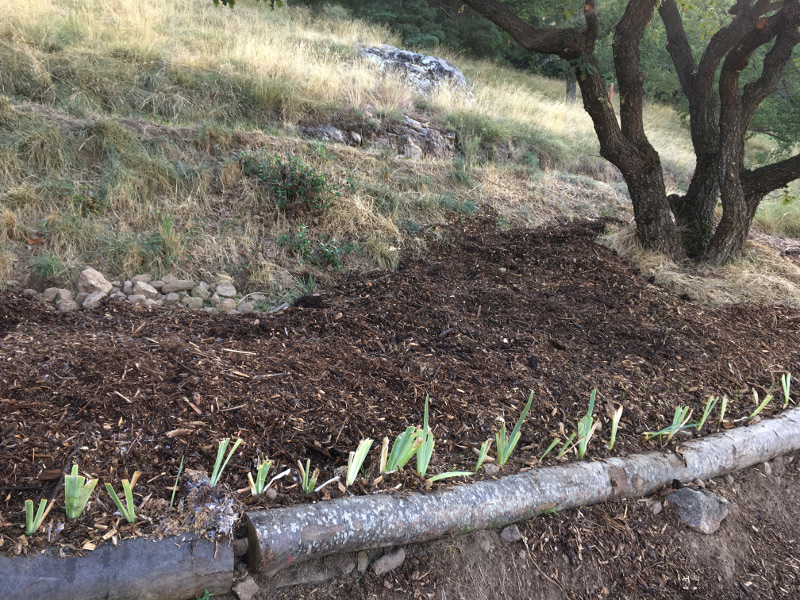 And even better – you won’t be bored by mulch stories again.

Sure. And we all believe in the tooth fairy.