Farewell wire fencing on the farm 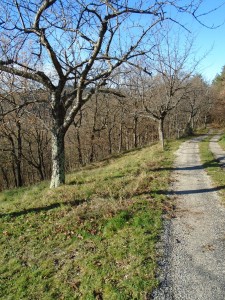 A neighbour came driving up the road yesterday and paused to see what I was doing.

‘I’m removing the fencing from the farm,’ I replied. Dreading his intake of breath and surly response about how the horses are now going to be contained.  But all Claude said in reply, was to smile and say: ‘About time too. My goodness your fences are ugly.’

So that is it. I have the official Ardeche farmer seal of approval for my radical task. 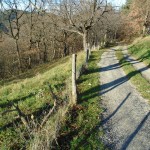 And one day later I can happily say the main fence is gone. It has been cut into lengths and rolled and flattened and dragged up to the parking area where I will then fill the car and take the bits to the tip.

The fence posts have gone the other direction: stacked behind the stables.

And I ache all over from the effort but boy am I pleased.  Some of the fence posts refused to yield. And one had me staggering with comic timing down to the terrace below with wires and post just attached.

What a nest of brambles were lurking in the undergrowth. These had to be cut away. And I really do have about 100 more metres to go.  But those bits of fencing are much further down the track; and importantly – out of my field of vision. 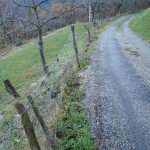 And despite it being the Sabbath, I must confess to getting out the strimmer and giving everything a tidy.  It was blowing a gale, so I doubt there was much risk of noise pollution annoying people across the valley.

And besides, hunters were blasting away with shotguns, so what’s a tinny strimmer compared to that? 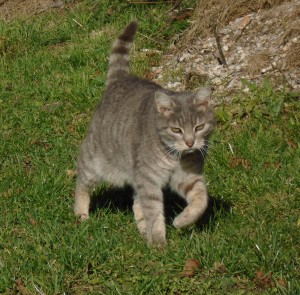 You will be pleased to know that I had a supervisor throughout the morning work.  Artur came racing down from the potting shed where he is living this week.  Jean Daniel is away and his house is freezing.

Artur prefers to pack down in a big nest of nets and fleeces that I have stored under one of my staging benches.  And then moves out when the sun comes up and hits his favourite top of the bench spot.

But how lovely that he came out and actually frolicked in the sun.  Well, a leisurely frolic. He raced over and sat on my lap for a bit and sniffed the cool winter air. 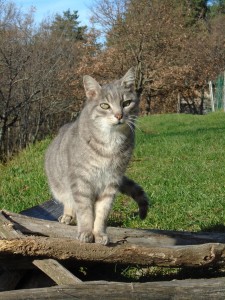 He then followed me about when I was working my way down the fencing.

It’s a surreptitious sort of following. Nothing slavish and devoted about it. I just look up and realise he is just beside me but not looking at me. And not engaging. But nearby.

And then he very unhelpfully stood on the pile of fence posts and refused to give them up when I hauled the wheelbarrow over to the pile.

He only gave up guarding them when he realised he was late for his lunchtime snooze. He trotted back to the potting shed, and I went on with wheeling the pile of chestnut fence posts to a new hiding spot behind the stables. I’ve earned a beer tonight.

« Lifting dahlias and transplanting fruit trees » The photo round up