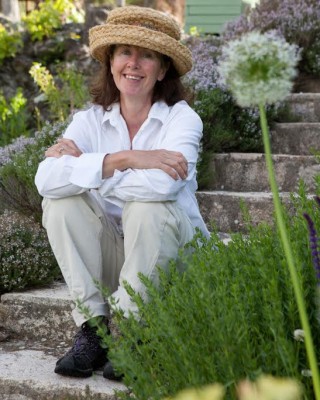 I am a journalist and researcher, developing screen stories and scripts for the film industry.

My career began with a bang in 1990 when I bought a one way ticket to Moscow on a whim and found work as a journalist at Moscow Magazine and then as the food and travel writer for The Moscow Times.

Coups, war and revolution. It was a mad time to become an Aeroflot Frequent Flyer. My book The Wistful Gourmet; stories and recipes from Russia gives you a glimpse of life during those fascinating years.

Since then I have opted for a much quieter life. In my spare time now, away from film scripts, I’m a gardener, cook and farmer in the Ardèche, France. I have developed an obsession with jam making and preserving which is endless fun.

Follow my adventures of life on a chestnut farm in the south of France. If you want to skip the gardening, then delve straight into seasonal recipes for preserving and cooking homegrown fruit and veg.

As seen in House and Garden magazine!  Here’s your chance to read a shortened version of my life on the farm.  And to see more of Carla Coulson’s beautiful pictures of our rural property.

*The Ardèche is a département in the Rhône-Alpes region of south-eastern France.